Snow. Pure, white, pristine, you think. Not in April, at least where I live. It’s predominant character is that it is dirty. Actually more dirty than you might think. As the snow melts, well-preserved dog poop is revealed. As a dog owner, it doesn’t shock me that much, but it does not exactly make a very good argument for liking April. Grey, slushy and poopy, not to mention chilly. Spring indeed. 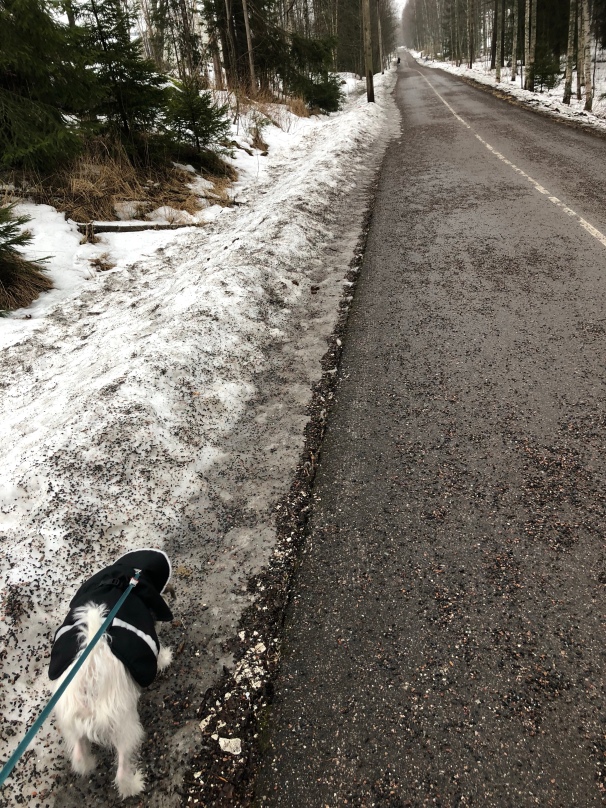 The gentleman in the black coat in the picture is not completely innocent in this matter. His name is Dali, that is without the ´, stress on the first syllable – he is very particular about this as he isn’t really a fan of Dalí. I don’t like the moustache and anyway, I prefer Renaissance art, he says. Why didn’t you call me Rafael?

Today is a bit of a day off. I have to run around doing this and that, but no music commitments. Tomorrow begins what will probably be the heaviest week during 2018 for me. Four concerts, nine rehearsals and a visit to Northern Finland. I am not the best planner of schedules, I have to admit.

How do I survive this kind of week? Well, I am not sure I will, but if I do, it will be by a) thinking of it as a long-distance run and b) by compartmentalization.

During a long run, you can’t really do the run in one go. You have to do it one km at a time, or chop it up into even shorter bits. Ultimately you do it one step at a time. A week like this is the same. You can’t think of anything but the next step. Do this bit well and move on to the next. One piece at a time, letting the music carry you. Weirdly enough, before you know it, it’s over.

The other thing for me is to forget about all the other things going on and concentrating just on the task at hand. This compartmentalization is like batting in my favourite sport: cricket. A novelist (this is a quote from memory) once said: The English, not having much sense of the divine, had to invent a game that gave them some kind of idea of eternity. Which means that you can bat for a long time. In international games, this could be for over 10 hours. Even in our limited amateur games, it could well be three hours. What I’ve learnt through longer stints at the crease is that you have to be able to switch on and switch off. You can’t concentrate fully for the entire time. Between balls (they’re what you’d call pitches in baseball) you need to switch off and empty your mind. And you need to forget the previous ball and just watch the next one intently.

To put that into choral context: concentrate fully on what you are doing and close out everything else. And when you get the chance, switch off and, in concert, forget how the previous piece went. The next moment is the important one.

It is a lot easier to concentrate on only one project at a time, but sometimes you have these mad times when you are working on two, three or even four on-going projects. The only way for me to survive is simply to shut out what is not in front of me. The down-side to this is that I can’t just walk into the next thing because my mind is still on the previous event. I just have to make sure I have time to prepare a little before each new event, be it a concert or rehearsal, just to activate my mind to the new challenge. I let the previous event freely play in my brain until it is time to focus on the next (this is a form of switching on, as well).

I’ll keep you posted on how this is going throughout the week. I suspect the blog posts might be a little shorter in the coming week (you can stop applauding now, thank you:).