Big day. It’s odd to think that we have been preparing for this concert for almost a year (admittedly with some periods for other stuff in between). And, in some ways, the work I have done on the manner of singing, the arch is even longer. I have emphasized for the last two years that it is all about ‘how’ and not ‘what’.

It is a little like sports’ teams. They work out their own way to play and stick to that method – the best of them through thick and thin (think Pep Guardiola or Jürgen Klopp). To get through what my ‘how’ is has been a huge project. I’ve banged on about it in every rehearsal trying to come up with methods and metaphors to help push the singers in the direction I want the singing to go (the latest ones are singing like on Broadway – open, light, optimistic -singing without a head and yesterday’s ‘ding’); we found a really suitable singing teacher for the choir (she is there during rehearsals and guys disappear to her room one by one); and I have met each and every one of the singers face-to-face in a session in which we have talked about their singing (what works, what they could work on and which bits of my general feedback will probably be relevant to them).

And then it is just one day and one concert. For the guys’ sake, I really, really hope they get the reward they richly deserve.

The morning rehearsal was early 9-12), but it seemed to take us closer and closer to where we need to be. The visual side is absolutely fantastic (projected on a huge screen behind the choir). In my view, this can only be a success.

Even the weather is on our side. The temperature is well above 10 degrees and the sun is smiling on us.

This, by the way, is the busiest street in Helsinki about 12 noon on a Saturday morning. 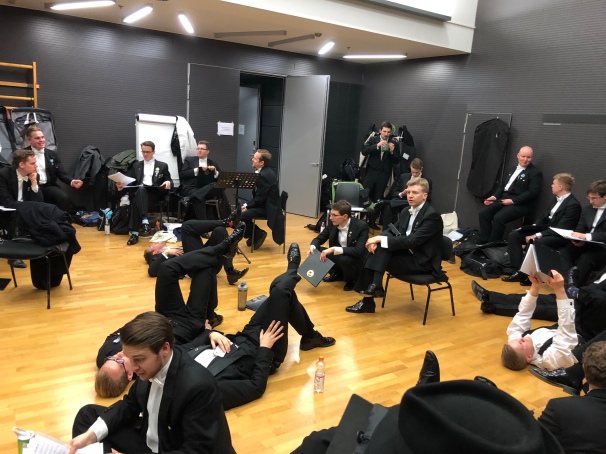 Half way through. A few things could have been better, but that was pretty good! A full house that seems appreciative of our efforts. Now four more works – smaller in scale and easier than the ones before the break. But with their twists. After that it is the massed choir with over 100 alumni. I can breathe lightly once we get that far.

My plan is to say that we lead 3-1 after the first half and now need to make sure we stay on top by starting well. Score one or two more and defend well. Let’s see.

Ah. Do I feel good, or what? The reception of the concert has been overwhelming. And my men are proud of what they achieved. They deserve this richly.