Lovely day. Almost Finnish summer temperatures (+17). It doesn’t take much warmth before nature has its way. 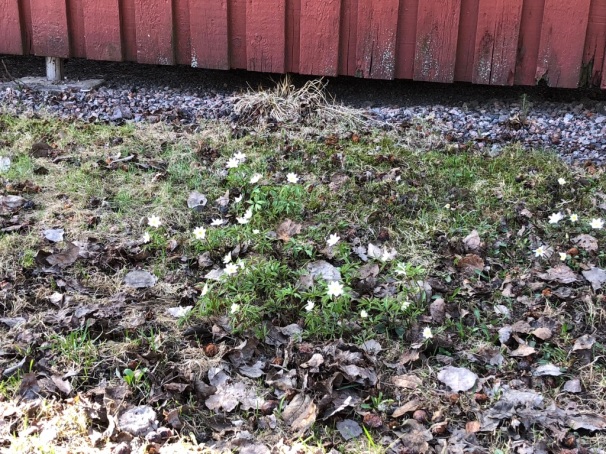 The arrival of wood anemones normally coincides with Mothers’ day (second Sunday of May), which means we are about three weeks ahead of schedule. But don’t worry, April is not going to give in, there will be a backlash shortly.

As I grow older, I notice I demand more and more of myself and the results of my work. In a way, it is a good thing and it drives me on. But at times I regret losing the natural, carefree courage I once had. Admittedly, the results tend to be better nowadays, but lurking is a fear of failure that seems a little unreasonable to me, at least in my sane moments.

I have the luxury of working with really good choirs, so the concept of failure needs to be put into that context. The things I equate with failure are not real failures, they are mostly just failing to reach the full potential of the group.

Related to this fear is a phenomenon I really dislike: I start looking at myself from the outside – thinking what others (colleagues, critics, connoisseurs) might think of me and my work. The moment that happens, I lose the here-and-now that conducting is at best. Ralph Fiennes explained in an interview why some takes in making a film are better than others. He said that in some takes the actors just forget about themselves and become what he called transparent – and the message shines through much stronger. This comes very close to how I feel when everything on stage just is, when I am not acting out being a conductor, I just am and conduct.

You’ve probably heard of the quote that is attributed to at least half an dozen people, including Muhammad Ali: If your dreams don’t scare you, they’re not big enough. This is the thing – big dreams are terrifying and they lead you into moments when you are scared of failure. As I said at the top, with age, these fears do not go away, they just get worse. But for me, the answer is not to downsize my dreams. If I did, I might as well throw in the towel. Sure, there is such a thing as being overly and unrealistically ambitious, but I am much more afraid of not being ambitious enough. Go for it and cop the consequences, say I (to myself).